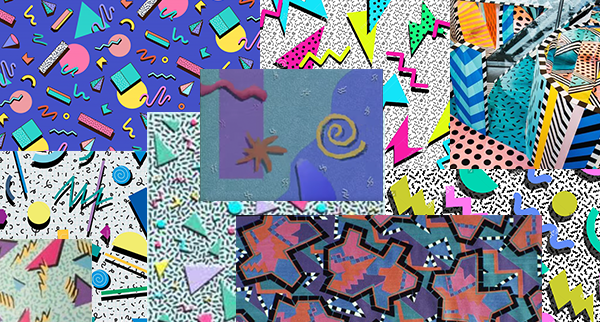 Everyone loves a viral debate… was that dress blue and black or white and gold??? Well there has been a new brain teaser on the block and it’s all about an iconic print. Where have I seen that before…?

A seemingly innocent query prompted by a twitter user has everyone scratching their heads and generally getting more and more frustrated with internet searches abounding, trying to track down the now infamous print pattern.

I like many people thought it was used in Saved By the Bell’s title sequence, and you can see why… Ken Johnson was the Production Designer for Saved By the Bell Saved By The Bell Titles Saved by The Bell Title Sequence

The styling is clearly heavily influenced by the Memphis Group design movement, which was founded by the highly influential Ettore Sottsass in 1981. When I originally started looking more deeply into where the hell this print originated, I thought it might be from the great man himself. I then got lost as many people do on a vibrantly colourful trip around the crazy world of terazzo prints and the Memphis Group’s incredible hold on the 90s look and feel.

It’s no wonder everyone is scratching their heads on this particular print, it’s totally indicative of the late 80s early 90s vibe that was used in not only teen’s TV shows but also by the Music scene and MTV… The origin of the original print is still unknown, however it is currently being used on the Rocket Distinct Complete Skateboard.

This little conundrum is driving people round the bend with many re-tweeter claim that they’re losing sleep over this, have lost friends and are now receiving death threats, because the pattern is so familiar yet seems to be impossible to find… certainly on the internet anyway… I now have an almost uncontrollable urge to rummage around in the loft to see if I can find this print on anything… my feeling is it was probably used on WH Smith stationery around 1992/93.

The comments on the original tweet are hilarious with one person going so far as to mock up an album… Do you know where this print can be found? Keep in the know and sign-up to our Juicy News!

Processing...
Thank you! Your subscription has been confirmed. You'll hear from us soon.